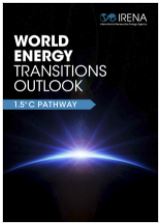 The World Energy Transitions Outlook from the International Renewable Energy Agency outlines a pathway for the world to achieve the Paris Agreement goals and halt the pace of climate change by transforming the global energy landscape. This report presents options to limit global temperature rise to 1.5 degrees Celsius and bring CO2 emissions to net zero by 2050, offering insights on technology choices, investment needs, policy framework and the socio-economic impacts of achieving a sustainable, resilient and inclusive energy future.

The Planned Energy Scenario (PES) is the primary reference case, providing a perspective on energy system developments based on governmentsâ€™ current energy plans and other planned targets and policies, including Nationally Determined Contributions (NDCs) under the Paris Agreement.

The 1.5Â°C Scenario (1.5-S) describes an energy transition pathway aligned with the 1.5Â°C climate ambition â€“ that is, to limit global average temperature increase by the end of the present century to 1.5Â°C, relative to pre-industrial levels. It prioritizes readily available technology solutions, which can be scaled up at the necessary pace for the 1.5Â°C goal.

This Outlook presents several prerequisites that underpin the theory of change behind IRENAâ€™s 1.5Â°C Pathway.

Over 90% of the solutions shaping a successful outcome in 2050 involve renewable energy through direct supply, electrification, energy efficiency, green hydrogen and bioenergy combined with carbon capture and storage (BECCS). Innovative solutions are reshaping the energy system. Yet, the necessary deployment levels at a speed compatible with 1.5 C will require targeted policies and measures.

Energy transition investment will have to increase by 30% over planned investment to a total of US$131 trillion between now and 2050, yet will yield a cumulative payback of at least US$61 trillion by 2050. Sharp adjustments in capital flows and a reorientation of investments are necessary to align energy with a positive economic and environmental trajectory.

A transformed energy sector will have 122 million jobs in 2050. Renewable energy jobs alone will account for more than a third.

IRENA is a global intergovernmental organization established in 2011 that promotes the widespread adoption and sustainable use of all forms of renewable energy, including bioenergy, geothermal, hydropower, ocean, solar and wind energy.

â€œHydropower is one of the oldest renewable energy sources and has grown much less in recent years than other renewables such as wind and solar. Also, new hydro installations increasingly have to be aligned with efforts to protect natural habitats and to minimise social impacts and conflicts surrounding the use of water resources among different communities and countries that share watersheds. Altogether, jobs in hydropower are expected to remain stable at around 3.5  million across the transition,â€ the report says.

Hydropower provided 1.96 million direct jobs in 2019, down slightly from 2.05 million in 2018. IRENA says renewable energy jobs will increase to 43 million in 2050. In the PES, renewable energy jobs increase 9% from 2021 values to reach 18 million jobs by 2030 and 23 million by 2050. By contrast, the 1.5Â°C Scenario leads to a much larger gain by 2030, with renewables jobs more than tripling to 38 million over the coming decade. Solar photovoltaic accounts for the largest share, followed by bioenergy, wind and hydropower.

In another trend, the IRENA report says â€œSince 2010, public support for renewable energy in developing countries has been progressively directed away from hydropower towards less established technologies, such as solar and wind, as well as enabling infrastructure including grids and energy storage.â€

Finally, the report anticipates that global installed capacity of hydropower will remain fairly flat from 2020 to 2030.